MIXING TRACKS IN THE SHADOW OF USF 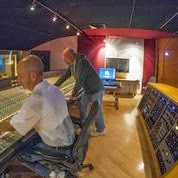 A short distance from the Tampa campus, a business with strong ties to the University of South Florida is providing a service that is becoming increasingly rare: expert sound recording.

Morrisound – a full-service recording studio – attracts a diverse clientele. You are just as likely to hear jazz, country, gospel or bluegrass as folk, rap, hip-hop, punk, funk, R&B and death metal. Soloist, trio or larger band, church choir or orchestra, all are welcome.

“We see as broad a spectrum as you would ever hear,” says Tom Morris, co-founder of the company with his brother Jim.

The Morris brothers, both USF alums, genuinely like the variety of performers who show up at their doors.

“Part of the joy of what we do is that seldom are any two days the same,” Jim says.

The two come from a long line of musicians and music lovers. Their maternal grandfather Merlin Leslie Price owned the M. L. Price Music Company, Tampa’s largest music store in the 1920s and 1930s. For a time he also served as an organist and pianist at the Tampa Theatre for silent movies. Their father, a B17 pilot during World War II, was a trumpet player in the big bands of his era. Just about everyone in the family plays an instrument and family jam sessions happen on a regular basis.

Is it any wonder they would find themselves surrounded by music on a daily basis?

Gold records at the entrance to Morrisound set the tone. Enormous sound boards in two studios – one with 80 channels and the other with 64 – make it clear: Morrisound is in the business of producing high quality professional recordings.

The facility is not limited to recording music. The studio also does ADR work (dialog replacement) for major film companies, voice over recordings for television and radio ads. Narrative recordings for audio books – and motivational tapes are also produced there.

One memorable project with the late actor Leslie Nielson – recording his voice for a Disney film project – left a lasting impression.

“He looked like such a serious person, but he was as funny and fun to work with as he appeared to be in the ‘Airplane’ movies,” Jim says.

It’s possible to record two entirely different projects in their two state-of-the-art studios without them disturbing each other. In fact, Gen. Schwarzkopf once made an audio recording of a book he wrote in one studio while a heavy metal band from Germany rocked out in the other. When they met in the lounge on a break, they got along famously. In fact, a collaboration or two has been born in that very lounge between different clients.

The two brothers almost veered away from careers in music. They were engineering majors at USF. One would guess sound engineering, but not so. Jim was an electrical engineering major and Tom earned both a bachelor of science and a master’s degree in chemical engineering. Music was only a side interest as they played in college bands.

Captivated by the process of recording sound, the elder brother, Tom, started the process of shifting gears. He moved up to an 8-track analog recording system from a small set-up in a room in his home. He and his brother gradually moved on to better locations – a mobile truck and then a storefront – and increasingly sophisticated gear. Some of those first and best quality pieces of equipment are still integrated into their present system but those electronic gems are overshadowed by 32 years’ worth of acquisitions. 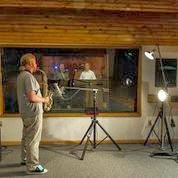 Now, three buildings under one roof comprise Morrisound’s home after launching the present-day business in 1985 as the only facility on the west coast of Florida designed solely as an audio recording facility.

While the two sound experts are both alumni, they are not the only ones from the Morris family to attend USF. Jim’s daughter is currently a student. Tom’s son attended USF as did Jim’s wife and two of their three sisters.

The USF connection continues with the addition of John Tucker to the staff. The saxophonist who received his master’s degree from USF’s School of Music in May just started working as an assistant engineer.

USF’s own Distinguished University Professor of Jazz Studies Chuck Owen was right at home when he recorded his latest album, River Runs, there. Morrisound also provided the perfect setting for the launch party attended by USF President Judy Genshaft and School of Music Dean James Moy.

This was not Owen’s first outing with the brothers Morris, however. He’s been recording with them since 1982, before they moved to their current location from their original storefront (1981), what was then the first new 24 track facility on Florida’s west coast. Those years encompassed “producing about a dozen USF recordings, all five of my projects with the Jazz Surge – since 1995 – and probably another dozen in which I conducted or contributed as an arranger,” he said.

“While I love working in the studio in general, working with engineers such as Tom and Jim is just pure joy. Not only are they extremely skilled, technically savvy and a pleasure to work with, they possess the most important attribute an audio engineer can have. They listen!  I trust and rely constantly on their ears and musical inclinations.”

Owen appreciates that they never “impose their own sensibilities. Having worked with Tom for so long, he has a pretty good idea of what I’m shooting for at least as a baseline. But, as every project is unique, we always spend time discussing how this might impact our recording strategy and he remains remarkably intuitive and flexible in adjusting to the special needs of the moment.”

River Runs, was like no other project Owen has worked on at Morrisound.  It required a full symphony orchestra, plus jazz musicians. Though spacious, the more-than-full complement of musicians could not fit at one time.

“We spent considerable time debating the alternatives – recording in other local venues, in other cities with large soundstages, even utilizing European orchestras or venues. Ultimately we decided both the project and budget would be better served staying here.”

For both it was a learning experience.

“I was able to proceed confidently, knowing that Tom understood and would strive to meet my artistic demands even when that might require new techniques and equipment. So we ‘tracked’ this project, recording sections, the strings, brass, rhythm, etc., separately.”

In all, there were about 10 recording or overdubbing sessions. Tom recalls working with more than 130 recorded tracks with his Solid Sate Logic 9000 recording console and a ProTools HDX Digital Audio Workstation.

That left mixing and editing and finally mastering – all at Morrisound.

“I truly am happy with the results. Just as importantly, I’m delighted that so many of the comments I get about River Runs as well as prior CDs often include praise for the ‘incredible’ sound quality.  I think many – particularly the reviewers – are astounded that a studio outside of New York, London or LA can get such clarity and warmth,” Owen said.

Not everyone who uses Morrisound is famous or already successful. Less familiar names have arrived from Europe, Asia and South America making Morrisound nearly as global as neighboring USF – though not as much anymore. Since 9/11, travel to the United States is not as easy as it once was. That tragedy and a new landscape in the world of music have changed things over the years.

“It’s very different from when budgets were in the millions,” Tom said. “Recording studios took major hits as budgets were slashed. And the recording industry underwent a huge change over the past 10 to 17 years with the spread of home computers. Home recording became a viable alternative for more and more people so we saw a lot of competition from home studios.”

Undaunted, having designed their own studios, the Morris brothers consult with people who are building studios in their homes. They also teach classes that help the do-it-yourselfers get the most out of their equipment. Their course, Recording 101, starts in September.

When musicians reach the limits of what they can do at home, musicians can bring tracks in for tweaking and expert mixing. They can also do the reverse – record the tracks at Morrisound and play with them at home.
Professional studios clearly still have a role because of what they have to offer to clients both far and near.
While in Florida on a concert tour, the group Destiny’s Child had a day off they used to record some songs.
“It’s great that they were able to find what they needed while here in town,” Jim said.

Closer to home, Owen agrees, and added, “While the facility, equipment, etc. are important, the engineer is the crucial link. Selecting an engineer that has a proven track record is smart. But you have to make sure you are able to communicate readily with him or her. It only takes doing a session or two with an engineer that doesn’t listen, or can’t be bothered to alter the way things have ‘always been done,’ to recognize how valuable a good engineer is.”

One service not all sound studios can offer is engineers who can also join the recording session. Both Morris brothers are guitar players and have been known to fill in – in a pinch.

“Sometimes when musicians want to achieve a sound and don’t know how to get it, we’ve stepped in because we have the experience,” Jim said.

Tom added, “What we enjoy most are really creative musicians, not just copying what others are doing. When they’re picky about what they want and they have a concept of where they want the music to go – that makes it a lot of fun.”

Do they see many potential stars come through their doors?

“We see a lot of really talented people who just can’t seem to make the step to the big time. I think it’s more because they have no business sense or knowledge of what it takes to have success as an artist. You have to be willing and able to go out and promote yourself,” Tom advises.

“This facility is for musicians who have crossed a certain plateau – it’s not for everybody who has ever picked up an instrument. This is the place to come when musicians need it done right with the utmost professionalism.”

Once ready, recording is surprisingly affordable, they say. In addition, musicians can register for a funding page on Morrisound’s website. “We invite anyone interested, whether our friends, colleagues or fans to visit the pages and donate to projects they’d like to support,” said Tom. “They can use the funds for tracking, mixing or mastering their projects.”

With all the talent in Tampa Bay and beyond, Morrisound’s specialists are ready, willing and able to use their expertise to record whatever comes their way – all genres – and help them sound their best.