Music Fills The Miami Air During The Summer


Publisher's Note: Last week I had the pleasure of attending two events that marked the beginning of the 3rd annual Miami Music Festival. Both events were held on the Barry University campus, right in my own backyard.

The first was an exhilarating piano faculty recital by Ching-Yun Hu. As I listened to the outstanding technical display of pieces by Rachmaninoff, Chopin and even George Gershwin in between, I thought this is such a great start and wonderful segment for a great music festival. If this, my first concert attendance for the Miami Music Festival was this good, the rest had to be equally brilliant.

Two days later I was back in attendance at Barry University for Zarzuela in the Summer Nights. Dedicated to pianist Sergio Puig, the scenes from the Zarzuela project were performed wonderfully by some of the international opera students in Miami for the festival. I believe I witnessed something very special that night. These young people were exceptional. I’m sure I saw some of the same performers who will someday grace the stage of the Metropolitan Opera House and more. There are so many more performances through the rest of the month of June and July. If you are in the area, I encourage you to choose a couple of events and enjoy the summer of music at the Miami Music Festival.

Miami Music Festival (MMF) is proud to announce its third season, with the expansion to eight-week programming, the introduction of the unprecedented Miami Wagner Institute, an orchestral tribute to celebrated violinist Ida Haendel, an increase to six full-scale opera productions, and the welcome of several renowned guest artist and faculty members through the months of June and July, 2016.

The announcement of a professional division with the Miami Wagner Institute heralded news of an elite, one of a kind, tuition free program for young professional dramatic singers led by program director and Metropolitan Opera soprano Christine Goerke. Launching July 5-16, 2016, the creation of the Miami Wagner Institute aims to provide much needed training and professional level performance opportunities for the unique demands of the dramatic Wagnerian singer.

The inaugural Wagner program culminates with a return to South Beach's premier venue, the New World Center, in an MMF gala concert featuring two of the world’s most in demand Wagnerians in excerpts from Die Walküre ; Christine Goerke, “Brünnhilde” in productions at the Metropolitan Opera, Houston Grand and Washington National Opera, and international bass baritone Alan Held, “Wotan” in productions at the Canadian Opera Company and Washington National Opera. They will be joined by featured singers from the Wagner Institute, and the MMF Symphony Orchestra. MMF’s gala concert will also feature Strauss’ Suite from Der Rosenkavalier and excerpts from Wagner’s Ring Cycle. 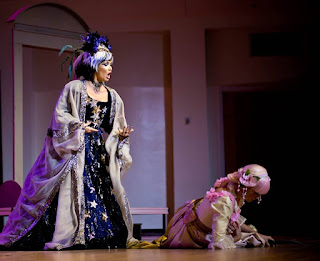 In an opening July 9th concert, the MMF Symphony Orchestra kicks off their season with Mahler's Symphony No. 6. MMF then honors legendary international violinist Ida Haendel and her illustrious career as one of history’s great musicians in a “best of” festival concert on July 23rd. Winners of the MMF Concerto Competition will perform in honor of Ms. Haendel, which will also feature the M MF Symphony Orchestra in Strauss’ Also Sprach Zarathustra, as well as the MMF Piano Institute’s Concerto Competition winner.

The MMF Piano Institute welcomes a new team of artistic giants to the faculty including international soloists and pedagogues Yoheved Kaplinsky (Chair of Piano Department, Juilliard), Anton Nel, Di Wu, Ching Yun Hu and Alexandre Moutouzkine. These acclaimed teaching artists will conduct faculty recitals and master classes open to the public. The Piano Institute continues its annual Concerto Competition, while expanding to include collaborative training in chamber music and opera, along with a traditional solo curriculum focus.

Following a successful monthly performance series in the Lobby Salon, The Betsy–South Beach and MMF present intimate summer chamber concerts every Tuesday and Thursday evening beginning June 9th, featuring the best and brightest performers across institutes; concerts are free and open to the public. Other event highlights of the 2016 Festival include solo and faculty recitals, concerts in chamber music, Zarzuela, Broadway and more.

A nationally recognized classical music festival primarily staged during Miami's summer "offseason," the Miami Music Festival has become an international destination for young artists preparing for the rigors of the professional music industry and a welcome addition to South Florida's blossoming cultural dynamic. With the 2015 festival praised as “a highly varied program at a skill level that... could have passed for professional” (South Florida Classical Review), and admired “for giving pre-professional artists a literal and metaphoric stage to sharpen their crafts” (Forbes Travel Guide), MMF's future growth is poised for even greater success.

Through their continuous and generous partnerships, the festival is proud to call Barry University its home campus and The Betsy South Beach its official hotel, with major concerts performed at both venues, along with the New World Center.

Miami Music Festival is made possible through partial grant funding and sponsorship including assistance from Miami Dade County, Culture Builds Florida, The Miami Foundation, and Citizens Interested in the Arts, The Plutzik Goldwasser Foundation, and Steinway Piano Gallery.

For a complete listing of artists, concerts and performance dates and locations visit the
Festival's website at www.miamimusicfestival.com .

The mission of the Miami Music Festival is to provide affordable, world class instruction and groundbreaking performance experience to the next generation of elite classical musicians while contributing to South Florida's artistic community in an impactful way.
Comprised of unique institutes–Orchestra, Opera, Piano, and Conducting–newly incorporated MMF training also includes a Professional Division incorporating the Miami
Wagner Institute, and a selective Career Institute. The festival gathers over 300 of the finest young talents from around the world to receive instruction and mentorship from an international array of 55 esteemed artist faculty. Founded in 2013, the Festival is a distinctive, exceptional new platform dedicated to identifying and developing the careers of the world’s most talented young professionals. For more information, please visit miamimusicfestival.com.