They Are Fit For Rivals


“The band already has millions of hits on YouTube for their previous tracks “Damage” and “Crash” and it’s obvious why – the music is solid, delivering a blend of grunge rock and punk similar to Bush, Hole and Foo Fighters.” -Curve Magazine

Fit for Rivals formed in 2008. Fit For Rivals began when Renee Phoenix met Thomas Amason while looking for a new guitarist for her band The Explicits. From there, they decided to set up a whole new project. Their debut album, Steady Damage, was released independently in 2009. The track 'Crash' has been used on PPV WWE: Over The Limit, the feature film 'Legendary' starring Danny Glover and John Cena and various other films and television programs. They recently signed with Big 3 Records and are scheduled to release their second studio album through them in early 2015.

Fit For Rivals is comprised of Phoenix (lead vocals), Amason (guitar/backing vocals), Dorman Panfoeder (drums), Eli Clark (bass/backing vocals) and Rufino Lomboy (lead guitar). The band offers an eclectic mix of genres such as rock, screamo, pop, punk and electronic resonating with fans from all over. Lead singer Renee’s heavy-metal-rasp vocals have been compared to legendary singer/songwriters Joan Jett and Brody Dalle. Musician Photo Journal reviewed the band’s SNOCORE Tour 2015 and exclaimed, “Vocalist, Renee Phoenix reminds me of a young Joan Jett. Especially in songs like “Hit Me Like A Man” and “Crash.” They are definitely a band to keep an ear out for and eyes peeled for them to come to town.” 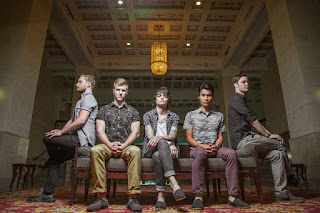 Jacksonville-based active rockers, Fit For Rivals, completed the 2015 Revolver Tour this April. With the release of hit single “Freak Machine,” via Big 3 Records/Sony Red, the band has been generating quite a buzz. Diffuser.fm, who premiered the newest track, raved “‘Freak Machine’ is instantly catchy with a steady groove and constant build-up that feels like the song could go off the rails at any moment.” Fresh off Snocore tour 2015, where Fit For Rivals supported Flyleaf, Adelita's Way and Framing Hanley, the band will join Flyleaf on the road again for the Revolver Tour. They will be hitting major US cities that include St. Louis, Tulsa, Dallas, Nashville, West Columbia, Atlanta, Charlotte, Fort Lauderdale, Saint Petersburg, Pensacola and Houston.

Fit For Rivals has managed to create a fierce musical signature incomparable to anything else. The Post-Gazette raves, “After listening to their music, it made sense as the band’s highly melodic sound attracts a fan base that includes followers of Queens of the Stone Age, Paramore and The Faint.” Signed to Big 3 Records, Fit For Rivals are currently in the process of recording their second studio album of title track “Freak Machine.” They have a massive fan base after earning nearly 20 million views on YouTube and they have also played with Red Jumpsuit Apparatus, Hoobastank, Blameshift and Icon For Hire. Be sure to stay updated with this band on the rise by checking out their website HERE and keeping up with their nationwide tour.