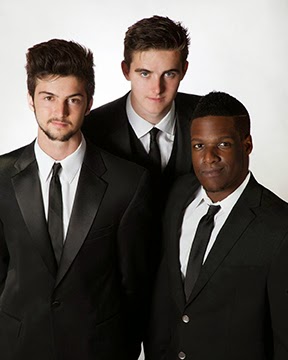 KAJ Brothers, Orlando’s emerging pop trio releases their debut single and video. The group’s rendition of the classic hit song, “Hello,” written by iconic superstar Lionel Richie, integrates its own orchestral elements and full-bodied abundant harmonies in such a way as to elevate this classic song to new levels.

KAJ Brother’s genre is Pop/R&B with a classical twist with various musical influences that are not necessarily genre-specific. They range from R&B, Soul, Gospel, Pop and Rock to Classical, Country and the Great American Standards. Some of the great artists and legends that KAJ listens to and have gained influence from are John Legend, N'Sync, Backstreet Boys, Josh Groben, Justin Timberlake, Michael Bublè, Boyz II Men, Lionel Richie, Harry Conick Jr, Frank Sinatra, Kenny Rogers, and the Jonas Brothers.

The debut single, “Hello,” was produced by legendary music producer, Bryan Lenox, and was recorded in Nashville. Lenox is responsible for 51 #1 hit tunes and has been nominated for twelve Grammys, with one win. He has worked top artists including Elton John, Bruce Springsteen, and Michael Bolton just to name a few. The high-end music video for “Hello” was produced and directed by Saylors Brothers Entertainment. Projects produced by the Saylors include an exclusive shoot on the designers of Ferrari (Pininfarina headquarters, Italy), "An Animated Life" with Phil Roman (producer of "The Simpsons" and "Garfield"), "Dreamland" with Jonathan Breck (Star of "Jeepers Creepers"), and "MTV's Most Expensive Music Videos" (launched the single to #1 on the Billboard charts) by artists such as Master P, Snoop Dogg, and Mystikal.

All three of the group members are vocally trained by long-time producer and vocal coach Gerry Williams of Orlando. For over 20 years he has produced albums and demos for his students that have led them to flourishing careers in the music industry. Among whom are Grammy™ nominee and Dove Award winner Francesca Battistelli, and Actress/Singer (Vampire Diaries) Candice Acolla. He has also remixed music for Celine Dion, Jennifer Lopez, and Justin Timberlake. Williams’ work with major record labels (Warner Bros., Universal, Atlantic, and Sony) is another highlight of his career.

The KAJ Brothers have also partnered with Jay R. Schield at Over The Line in Nashville, TN, who among other things oversees and advises the group and serves as music industry liaison and product manager for the upcoming releases. Schield has worked with some of the top artists and music releases in the industry including P.O.D., Owl City, Randy Travis, Amy Grant, Plus One and Take 6.

KAJ Brothers have a prolific mission: to leave their audience uplifted and feeling loved with the primary purpose of elevating women with true love songs. When asked specifically about this, the group unanimously replied “To make chivalry cool again, and help raise the standards for girls and women while influencing humanity as a whole, to treat women with greater respect.” They have partnered with the International Justice Mission. IJM is a non-profit human rights organization based in the United States that helps rescue victims of human rights including anti-sex trafficking abuse around the world, in the US, Africa, Latin America, and South and Southeast Asia.

Profits Being Donated: KAJ Brothers have committed $10,000 to the International Justice Mission (ijm.org) to kick off their own campaign against sex trafficking encouraging other artists and celebrities to do the same. They will donate 100% of their first year’s profits from iTunes downloads of “Hello” to various charities that provide assistance to girls and women that will help free them from the horrors of sex trafficking.