Gianna Minichiello of Naples, Florida Teams Up with Award-Winning Producer

Singer songwriter Gianna Minichiello of Naples, Florida has teamed up with Tony Catania, an award-winning producer


At only 17 years of age, Gianna Minichiello is quite the accomplished singer and songwriter. With her acoustic guitar in tow, she frequents many local establishments to perform and even creates jingles for well-known companies. Recently, Gianna started working with Tony Catania, an award-winning producer, catapulting her career forward even further.


In 2016, Gianna was featured in the Naples Daily News. Reporters attended a show at Weekend Willies, then interviewed the singing sensation and featured her on their cover. More recently, she appeared on Fox’s program called The Morning Blend Show, and she’s even performed jingles for local companies like Oakes Farm. She performed her single “Thinking Too Much” live on ABC News during the Irma Goodness Concert, and this month, Gianna was again featured in the Naples Daily News after being chosen from among thousands of singer songwriters to perform at the Deland Music Festival, a one-day music festival for independent artists. She was in the running for the “Song of the Year” and “Vocalist of the Year” awards.

Gianna is working alongside Tony Catania, an award-winning producer who has worked with talents including Scatman John, who has sold 22 million CDs and has had three singles climb to the top of the charts in almost every country around the world. Tony himself is known for his own adaptive style in various genres, including pop, pop rock, electronic dance, hip-hop, and classic. He is nationally and internationally known for his unique approach to production. Working with Tony is an honor for Gianna, and the two are slated to continue creating new, fresh singles.

Tony Cantania and Gianna recorded her hit single, “Green Screen”.  On Tuesday, December 12, 2017 she performed the song at her music video release event at the Blue Monkey in Naples, Florida. On her break they released and played her Music Video for "Green Screen" for the first time to the public which was filmed in Miami Florida. 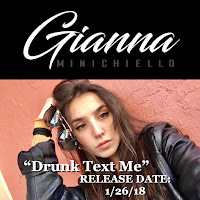 Gianna is Releasing her 4th Single called "Drunk Text Me" on January 26, 2018. The meaning of this song is about observing all the love stories inside songs and tying them together with her own experiences and showing the motto of 'everything happens for a reason'. This song could relate to a lot of people in today's society getting a form of communication from a past lover missing what they used to have while telling of all the new memories they haven't shared together... This is Gianna's second single that she worked on with Award Winning Producer Tony Catania.

Drunk Text Me  is a Dance Pop song that has catchy lyrics and current in today's Pop Music. Currently working on a location for a new music video to be released in 2018.

Gianna was born in Coral Springs, Florida to parents, Mike and Dorothy Minichiello.  She has a younger brother, Giulian and 2 English Bulldogs named Molly and Daisy. Gianna is a typical teenager that enjoys her friends, skateboarding, likes playing softball, and is in advanced choirs in High School.  She resides in  Naples, Florida.

Gianna Minichiello has been singing since she was 5 years old.  Starting with Avril Lavine's song "Complicated" we realized she had that special "something" to her voice.  Over the years she has been developing her voice and signature sound with school choir and vocal coaching.

At the end of 2015 Gianna was "discovered" through an a capella version of the song "Creep" by Radiohead on a simple cell phone video.  Through a series of events she was introduced to several people in the music industry that heard something in her voice that they liked.  Gianna  then met and felt a comfortable connection to International Singer/Songwriter Neysa Shaw and her husband, also a singer/songwriter producer/engineer, Michael Stewart.  Gianna flew up to Atlanta GA and recorded her first Original Song I'm Gone which was released in 2016.

Since then Gianna's singing career took off, she currently performs at all the Hot Spots in SW Florida area on Acoustic Guitar performing Covers and Originals. Gianna also performs at Festivals and was recently picked out of thousands of singer/songwriters to perform for the largest one day Independent Music Festival in Deland Florida in the Southeast. She has accomplished alot in a short time in her career. Gianna has also been on TV shows, different news channels for her music, and Commercial work for company advertisements.

Gianna shot her first Music Video for another Original Song that was released in 2017 that she wrote called "Thinking Too Much".