A Conversation With the Amazing Nestor Torres 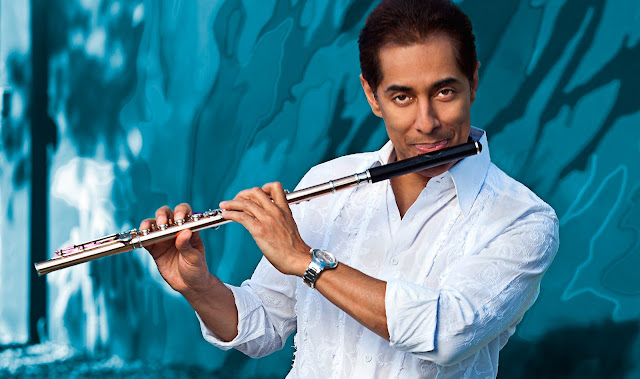 Born in Puerto Rico, Nestor Torres has made music all his life; first playing drums at age 5, and then flute at twelve years old. Moving to New York City in his teenage years, he studied at Mannes School of Music, Berklee College of Music & the New England Conservatory of Music in Boston, while at the same time learning to improvise in the ‘Charanga’ Cuban Dance Music style, which, combined with his Classical training and Jazz sensibility, shaped and developed Nestor’s melodic and danceable sound. Nestor’s command of his instrument allows him a freedom of expression that is at once captivating and liberating, powerful and genuine.

One of the joys in life is an opportunity to engage in an informative conversation. A few weeks ago I certainly enjoyed speaking with one of the great jazz musical artists of our time, Nestor Torres. Torres has the reputation of being one of the most talented flautists in South Florida and throughout the world. Also, most will readily tell you he is one of the most humble musicians you will ever meet. After speaking with him at length I can say first hand that the aforementioned characteristics are true. However, our conversation proved to be one of the most insightful since I began publishing. Nestor Torres is quite intelligent, witty and extremely knowledgeable about music in general. My hope is that everyone will enjoy meeting one of finest musicians who calls the state of Florida home.

Why did you choose the flute as your musical instrument?

As a child I was surrounded by musicians, my father was a musician as well as cousins who played musical instruments. In Puerto Rico where I grew up, in key cities there were free music schools. Most students were choosing popular instruments like trumpet, saxophone, piano etc. At the time I was asked what instrument I wanted to play. Not really sure, I saw a picture of a flute. I recalled times hearing the music of the flute in other recordings and in the orchestra, and decided this would be the instrument I would play.

Who influenced you most early in your development?

First, my father was most influential. He never really learned to read music, but was one of the finest musicians I have ever known. He was very demanding musically, but truly was a huge part of my musical development. Second, Tito Puente. I remember going to hear Tito play in New York, and he allowed me to sit in with the band. Puente explained that for this style of music, you will have to play in the third octave, or higher octave. This was such a clear directive but certainly helped me in later working with other Latin artists. Third, Hubert Laws set the standard for all jazz flautist. Listening to Hubert play changed my life. Certainly he is considered a master of the flute.

You attended some prestigious music schools in the northeast, which one stood out as the best for you?

Good question. I would have to say the New England conservatory. At the time every musician was required to read music in several different ways. Students had to be proficient with the piano, and have a sound grasp of music theory. New England Conservatory at that time was groundbreaking because they had jazz studies as well as contemporary and classical instruction, essentially breaking the barrier between the different musical genres. Also, Boston is such a rich musically cultural city, so yes, New England Conservatory would be the school that stood out the most to me.

Much was reported about your accident several years ago, are you okay today?

It has been 25 years. I am very blessed and grateful. although I have some aches and pains overall I am fully recovered and doing fine. There were a lot of negative consequences following the accident, but I learned a lot from the harsh realities of life. I had to make a choice, when confronted with a hopeless situation. Something that occurs that is so painful and catastrophic is the time when we find opportunity for growth and development.

You travel and perform l over the world. Do you like living in Miami?

Absolutely, I am very grateful to call Miami home. Miami has always been good to me.

In your opinion, what is the state of S. Florida’s jazz music scene?

There are some very exciting things happening in South Florida. When performing in South Florida I play at the nightclub Jazziz, in Boca Raton. The scene continues to evolve with contributions from great musicians like Silvano Monasterios. Also, radio station WDNA does some wonderful things promoting jazz music and playing music for the community. There are many truly wonderful musicians in the area, like saxophonist Ed Calle, and UM Music Dean Shelly Berg. The infusion of talent from Venezuela is helping the evolution of South Florida into a very vibrant jazz scene.

Nestor and I spoke about his current project Neodance. I thought best to include a link to the website and information about this very unique production.

Neodance™ is a dynamic Tango fusion of rhythms and dance. Weaving Tango as the common thread, Neodance combines a blend of the hottest genres in Latin music and Jazz with the sensual, seductive dances of Tango and Salsa. Nestor Torres' creative and innovative genius brings MrDance's vision to life... and now to the world.