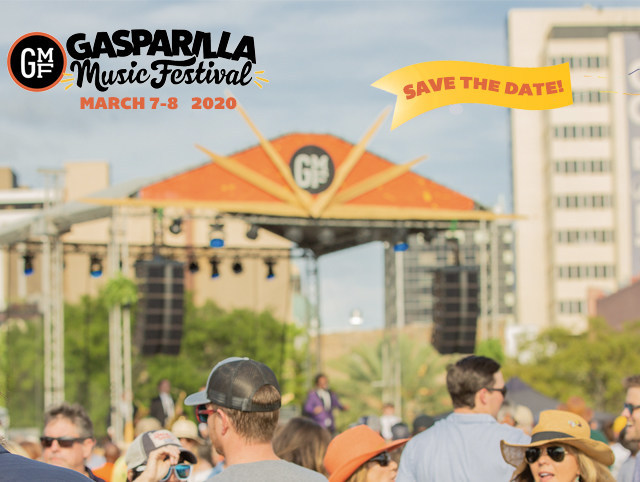 The Gasparilla Music Festival (GMF) has officially confirmed its 2020 festival dates.  The 9th annual festival will take place March 7-8, 2020, along Tampa's waterfront with early bird tickets going on sale in September. GMF will feature an eclectic mix of over 45 local and touring bands covering a wide variety of genres and performing on 5 stages in downtown Tampa. GMF 2019 had over 25,000 attendees with a Saturday sellout. Past festival performers have included The Avett Brothers, Gary Clark Jr., Modest Mouse, The Roots, Erykah Badu, Father John Misty, The Flaming Lips, and Cage the Elephant.
Community Comes First
GMF has established itself as Tampa's top community festival. The festival is organized by a team of dedicated volunteers, and funding for the festival comes from its over 70 locally based corporate sponsors. GMF's Calle Cocina features critically acclaimed food from the area's top restaurants with a mix of modern street food and indigenous Tampa dishes such as Cuban sandwiches, deviled crabs and grouper sandwiches. GMF also highlights local artists by booking over 50% of its acts from Florida.
GMF's Sustainability program was established in 2012 to reduce the environmental impacts of festival production. The program's initiatives have grown to include the elimination of single use plastics, recycling, composting, and the reduction of attendees arriving by cars to the festival.
"Community comes first with every planning decision we make. We want this festival to reflect the best parts of our amazing community," according to David Cox, GMF's Executive Director. "And, equally important, we want it to be a celebration of where we live."
Festival on a Mission
GMF has been described as a "festival on a mission". The Gasparilla Music Foundation, which produces GMF, provides music instruments, repairs, and funding for local Title 1 schools' music classrooms through its Recycled Tunes program. Recycled Tunes has provided support to 26 bay area schools and donated over 350 instruments.
"Our goals are to ensure that every kid has access to a musical instrument and to support their teachers so they can focus on teaching," said Cameron Williams, Recycled Tunes' Director.
The foundation also promotes local musicians through its GMF Productions program. GMF Productions has provided over 500 paid performance opportunities for local musicians. The program works with other organizations to showcase original artists from the Tampa Bay area.
"There is more talent in the Tampa Bay area today than during any time in its history," according to David Cox. "We want to ensure that music and art are woven into our region's fabric as it continues to grow."
Limited quantity "Early Bird" discounted tickets will go on sale in September at www.gmftickets.com and will start as low as $40 for a Weekend Pass. GMF will announce its 2020 music lineup later in the fall.
About GMF

GMF is produced by the Gasparilla Music Foundation, a 501(c)(3) non-profit organization founded in 2011. In addition to the music festival held annually during the 2nd weekend of March, the foundation works year round to support music education through its Recycled Tunes program and to promote local musicians through its GMF Productions program. The foundation receives support from its membership program, Higher Ground. For information about becoming a member, visit www.higherground2020.com
Email ThisBlogThis!Share to TwitterShare to FacebookShare to Pinterest
Newer Post Older Post Home