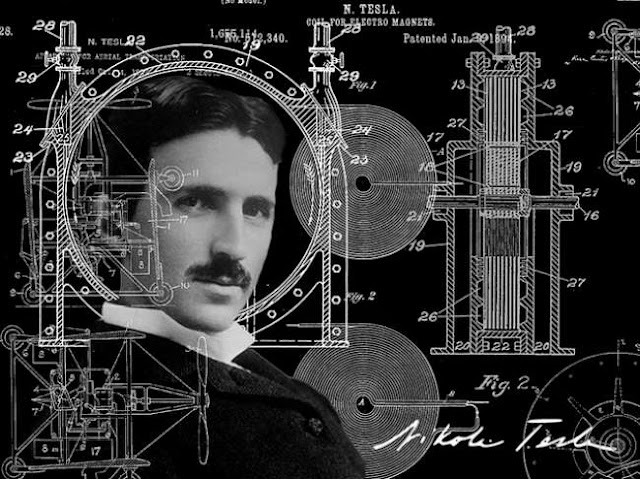 Last month I had the pleasure of speaking with Carson Kievman of SoBe Arts. He and playwright Thomas Babe created the production that will open September 28th at the Colony Theatre of Miami Beach called Tesla.  Kievman took a few minutes out of a schedule that cries for every second of attention, therefore I appreciate the opportunity to speak with him about his “labor of love”. The story is about the life and experiences of inventor and visionary Nikola Tesla. Kievman explained that he was drawn to the story of Tesla over 30 years ago. Nikola Tesla was a gifted inventor that realized a responsibility toward the environment, to the ire of many corporate investors who basically wanted him to continue with promised inventions.

Kievman feels that the story of Tesla will be of great interest to today’s audience. The show itself had incorporated much of what Tesla envisioned many years ago - electrifying scenic design, mapped digital projections and more. These features will make the production something that will interest both young and old.

This September, SoBe Arts will present the world premiere of TESLA, a multidisciplinary opera, by Carson Kievman and Thomas Babe, about the exceptional life, explorations and brilliant inventions of Nikola Tesla. We are pleased to announce our amazing cast and creative team and share the story of Tesla. Opening Night will be at 8pm Thursday, September 28, 2017 with additional performances on September 29, 30 and October 1 at the historic Colony Theater Miami Beach.

Nikola Tesla was an immigrant whose transformative ideas challenged the staid society, inherited wealth, and power structure of the Gilded Age. TESLA brings to life the revolutionary race with Thomas Edison to fuel a new era of electricity, and the portentous aftermath: from the peak of worldly renown, Nikola Tesla pursues relentless dreams of tapping natural forces that could further liberate mankind, but instead lead to his earthly demise.

Over a century ago Nikola Tesla, a true visionary, at the height of his success, realized that his prophetic work, which has framed worlds portrayed in science fiction and also formed the foundation for modern-day wireless energy transfer, wireless communications, laser beams, neon and fluorescent lighting, radio transmission, remote control, x-rays, lasers, robotics and much more, would require burning of fossil fuel and would ultimately destroy our planet. Composer/Co-Librettist, Carson Kievman has increasingly been drawn to these parallels between humanity, culture and environmental sustainability and it is this conflict that is at the heart of his motivation to tell the tragic and inspirational real-life story of Nikola Tesla, one vastly more captivating than that of any epic protagonist.

After giving away his patents and royalties Tesla pursued the creation of the 'Tesla Coil' to connect humanity to the very wheelwork of nature and allow the extraction of free and non-polluting energy for all. A friend of Mark Twain (our narrator), and peer of Thomas Edison, George Westinghouse and J.P. Morgan (all characters in the opera) he nonetheless died a pauper, crushed by the greed and hunger for power of his contemporaries.

The creation of TESLA was launched by composer Carson Kievman in 1986 at the Eugene O'Neil Music Theater Conference. Playwright Thomas Babe and Carson Kievman co-wrote the libretto in the 1990s and two scenes were work-shopped at the New York City Opera Vox Festival in 2004 by Encompass New Opera Theater. The Libretto was slightly revised (with the help of Mark David Needle) and the score was completed in April 2016. For the world premiere SoBe Arts has engaged part of the creative team from 2015's triumph, Intelligent Systems, the surrender of self in mystical contemplation and 2014's sensation, Fairy Tales, Songs of the Dandelion Woman, as well as some exciting new additions to our company.. .

TESLA is being performed by a top-flight cast of international singers, including:

Kenneth Mattice (Nikola Tesla) Award-winning, Wisconsin-native Kenneth Mattice is beginning his fourth season as the principal baritone at Theater Hagen in Germany. In addition to performing leading roles with the Bergamo Festival Internazionale della Cultura, the Macau International Music Festival, Theater Dortmund, Opera San José, Opera Tampa, Lyric Opera Baltimore and others, he has also collaborated with composer Carson Kievman in two of his previous World Premieres: Hamlet (as Hamlet) and Fairy Tales: Songs of the Dandelion Woman (as the Bank Examiner).

Kyle Albertson (J.P. Morgan) Bass-baritone Kyle Albertson is renowned not only for his versatile voice, confidence, and style, but also for his ability to bring a character to life on stage. Recent operatic engagements include performances with The Metropolitan Opera as Masetto in Don Giovanni and for productions of Le nozze di Figaro, Die Zauberflöte, Dialogues des carmélites, The Merry Widow, and two productions of Manon; with Houston Grand Opera

Timothy Stoddard (George Westinghouse) has sung the role of Song Seller / Gherardo in Puccini's Il trittico with the Utah Festival of Opera, Tamino in Die Zauberflöte with the Metropolitan Opera Guild, the title role of Mozart's La clemenza di Tito with dell'Arte Opera Ensemble, and Martin in The Tenderland with Chelsea Opera. He gave the world premiere of the tenor role in Carson Kievman's opera Intelligent Systems. Timothy performed as a soloist with the Lucerne Festival Academy under the baton of Sir Simon Rattle.

Anastasia Malliaras (Marie Astor Hampton) Soprano Anastasia Malliaras made her operatic debut in 2013 as Nannetta in Bay View Music Festival's production of Falstaffwhere she was acclaimed for her "floating high notes". Since then, she has been accepted into some of the most prestigious young artist programs such as the Young Artists Vocal Academy at Houston Grand Opera Studio. She has received her MM in Vocal Performance from University of Southern California (USC).

Chris Vettel (Thomas Alva Edison) now living in the San Francisco Bay Area, Chris grew up in the small town of Oyster Bay, Long Island. After graduating from the Manhattan School of Music with a Master’s Degree in Voice, he moved to Boston. There he sang for four seasons with the Opera Company of Boston and its touring branch, Opera New England. Chris originally sang the role of Mark Twain in the workshop of TESLA at the 2004 New York City Opera Vox Festival.

Ben Werley (Charles Proteus Steinmetz) Benjamin Werley--originally from Pittsburgh-- was seen in the Miami area as a Young Artist with the Florida Grand Opera last season, and will return there this season to sing Arturo in Lucia di Lammermoor and Narraboth and Second Jew in Salome. He is a graduate of Indiana University.

TESLA is being shaped by our brilliant creative team, including:

Carson Kievman's work follows an independent course that blends new music with the theatrical, visual and literary arts. His symphonies, operas, chamber music and multimedia music-theater works have been performed internationally in stage, concert, dance, and museum settings, from SoBe Arts to the Berkeley Art Museum; the Pennsylvania Ballet, The Public Theater (NYC), the Tanglewood Music Festival, and the National Theater Mannheim. Kievman has written 7 full length operas, such as California Mystery Park, Hamlet (commissioned by the New York Shakespeare Festival), TESLA and Intelligent Systems (commissioned by The NEA and the Donaueschingen Music Festival).


Thomas Babe's (1951-2000) plays Rebel Women, A Prayer for My Daughter, Taken in Marriage, Fathers and Sons, Salt Lake City Skyline, and Buried Inside Extra were first produced by Joseph Papp and the New York Shakespeare Festival. In the musical theater, he wrote the text for Twyla Tharp's When We Were Very Young and the libretto for Carson Kievman's TESLA. Babe was one of a group of 70s US playwrights who laid the ground for the likes of Quentin Tarantino and Aaron Sorkin. Like David Mamet and Sam Shepard, his plays contain half-crazed but intelligent, articulate characters. Darker passions of the human soul feature strongly.

Jeffrey Marc Buchman. Building on his previous successes directing the world premieres of Carson Kievman's Fairy Tales: Songs of the Dandelion Woman, and Intelligent Systems: the surrender of self in mystical contemplation, Jeffrey Marc Buchman returns to SoBe Arts to create the world premiere of TESLA. Opera News calls him "a formidable talent." Constantly pushing the limits of the performing arts, Mr. Buchman's versatility leads him to a variety of venues to revisit opera's classics while regularly premiering new works. His innovation puts him at the forefront of a new era in directing.

Mary Adelyn Kauffman music director enjoyed a free-lance career in Hamburg and Berlin before accepting her first position as assistant conductor and vocal coach at the City Theater in Hildesheim, Germany, in 2001. Before then, she toured with the Wolfgang Bocksch and Stella musical theater companies and coached at the Mozarteum, Sängerakademie and State Theater in Hamburg. In 2014 she was music director for the world premiere of Carson Kievman's multimedia chamber opera Fairy Tales and in 2015 she was the music director for Kievman's Intelligent Systems.

Rosa Mercedes Jeffrey Marc Buchman's collaborations with his wife, renowned choreographer Rosa Mercedes (who choreographed the world premiere of Intelligent Systems: the surrender of self in mystical contemplation), have resulted in over 20 acclaimed productions. The New York Times praises Rosa Mercedes' work as "hypnotically precise", Dance Magazine calls her a "virtuoso" and New York Magazine says she is "a delight, with lots of sparkle and tremendous elegance".

Paul DiPierro is a video designer and 3D animator based in the San Francisco Bay Area. He has been creating video content for the Opera world since 2010. In addition to his theatrical work, DiPierro frequently collaborates with National Geographic and the Ford Foundation.

Jeff Bruckerhoff has recently designed lighting for Seven Deadly Sins/Pagliacci at Virginia Opera and Orpheus and Euridice for The Vermont Opera Project, a company he co-founded with his wife. Jeff has designed Dido and Aeneus, The Long Walk and L'Elisir d'Amore for Opera Saratoga as well as Le nozze di Figaro and Madama Butterfly for the Tulsa Opera, Tosca for the Kentucky Opera;

Lucrezia Borgia at the San Francisco Opera; Hansel and Gretel and Sophie's Choice for the Washington National Opera. Jeff is the Director of Production at the Palm Beach Opera.
Nuria Carrasco Dominguez specializes on large-scale opera productions, and for the past 20 years she has designed costumes for Opera, Ballet, Theatre and Film and has worked in countries worldwide. Her scenic costume design credits include international productions of Operas Madame Butterfly, Carmen, Aida, Magic Flute and collaborations with renowned institutions such as Cairo Opera House, Timisoara Opera House, Warsaw Opera House and Ash Lawn Opera House.

Emily Malin has been working with wigs and makeup for over a decade. She began her career in 2005 as a hairstylist in Ohio before moving to Toronto in 2007 for training in film and theatrical makeup. In 2011, she relocated to Miami and has been enjoying experiences in all avenues of the beauty industry, from training new artists to working on film and TV sets.

SoBe Arts is a nonprofit organization dedicated to promoting excellence, creativity, and accessibility of the arts through performance events and arts education of the highest quality. Since its founding twelve years ago, SoBe Arts has produced hundreds of world premiere multimedia operas, concerts, and festivals. http://sobearts.org

Click HERE as we still need your help "Bring TESLA to Life" - Please make a tax-deductible donation today. For organizational or marketing partnerships email us at events@sobearts.org