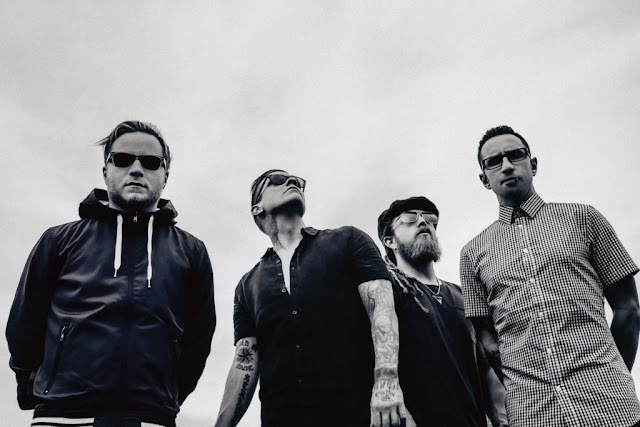 Over two years ago I featured a band in Weekly Music Commentary called Shinedown. At the time I thought it was a good idea to introduce the band and their story to the readers of my international music blog. Little did I know that today that blog post would become the most popular feature to date. Today I share the article with readers of Florida Music Letter. I'm sure you will enjoy their story like the readers of Weekly Music Commentary.

Since moving to Florida several years ago, I have learned a lot about local music scenes and music opportunities. The state of Florida has many natural musical divisions. North Florida is quite different from South Florida. However, when it comes to rock bands, the struggle always appears the same. Throughout the years I have met members of all types of successful bands from every corner of the state. Their stories are very similar. As I read the story from this weeks’ featured band Shinedown, it reminded me of some of those stories I heard in past years.
Some readers may be part of the loyal fan base that has followed Shinedown for over fifteen years of music-making. Others might not know one song from the hard-rocking outfit. Today, I just want the readers of Weekly Music Commentary to look at Shinedown’s story. After that you might listen to their music.
It all started back in the year 2000, when frontman Brent Smith’s prior band, “Dreve”, signed a record deal with Atlantic Records.  The record label, unhappy with Dreve as a whole, dropped the band prior to releasing an album, but retained Smith, who they felt was worth developing separately as an artist. Atlantic signed Smith to a development deal where record representatives helped him with his song-writing ability, and helped him recruit members for a new band, which would become Shinedown. Smith moved to Jacksonville, Florida and began work on the project in 2001.
The first member he recruited was bassist Brad Stewart, through local Jacksonville music producer Pete Thornton. Smith and Stewart began recording demos together in a small local studio, whose owner recommended they meet with her fiancé, guitarist Jasin Todd, who Smith brought in as the third member. The original lineup was rounded out by drummer Barry Kerch, who was the seventh drummer the band had auditioned for the spot. The four worked together on creating demos, and submitted their work-in-progress material to Atlantic, who approved of the material and green-lighted a full-length album.
I cannot count how many times I have heard similar stories from other bands from Florida. I can recall a few stories of bands being signed to record deals that did not work out. There were a few whom the label expressed interest in one or two members, forcing a band decision if they wanted to keep the contract. Tough, but record companies have to decide how they will invest funds. Most decisions are made with money in mind.
The resulting work was the band’s début album, Leave a Whisper, which was released May 27, 2003. While not an immediate success, through the extensive touring and successful singles, eventually certified platinum by the RIAA in the United States, indicating sales of over 1 million.
Another familiar part of any story from Florida bands has to be the will to work extensively. Shinedown, because they were ready and willing to tour helped promote their album. They turned an average album into a success all because they made sure a larger audience would hear their music. In many industry meetings with band managers and label executives I attended in the past, they all hammered the importance of live performances. This is where geographical differences played a part, as central and west Florida had many venues for live music. North Florida as well. Shinedown had no problem, especially if they worked further north through Georgia, South Carolina and more. Of course, Shinedown might have better touring opportunities than others because they had a major label behind them. Nevertheless, Shinedown made it happen by playing live a lot.
The band didn’t start work on a follow-up album until 2005, with the band finding the touring lifestyle too hectic to start writing or recording material. With the label pressuring Shinedown to record an album followup, the band released their second studio album, Us and Them, on October 4, 2005. The album debuted higher than Leave a Whisper on the Billboard 200 chart, peaking at number 23 versus Leave a Whisper’s number 53 peak, but the album ultimately sold less than its predecessor.
As I stated before, Shinedown’s story is very similar to other bands from Florida. Even the problems that they experienced are like many other bands. As Shinedown prepared to work on their third studio album, internal issues popped up that threatened the bands’ existence. Smith fired both Brad Stewart and Jasin Todd from the band. Smith let Stewart go due to disagreements with the direction of the band, feeling that Stewart was no longer happy or committed to the band. Todd was fired due to major disagreements with Smith, and personal problems that were getting in the way of the band. Then-touring guitarist Zach Meyers later recounted in pilotonline.com that both Smith and Todd were going through significant substance abuse issues at the time with drugs and alcohol, which lead to much infighting between the two. The band almost broke up during the period, but Smith firing Todd and stopping his drug use helped end the internal issues, and helped the band move forward.
Well, Shinedown continued to perform and record. In fact, they are looking to release their sixth studio album in 2018. Look for new music early next year. In fact, the new Shinedown album is rumored to be a concept album. That would be very interesting!
Certainly, if there are any young musicians out there forming a band, the Shinedown story is one they could learn so much. Remember, it’s a story that’s still being told.