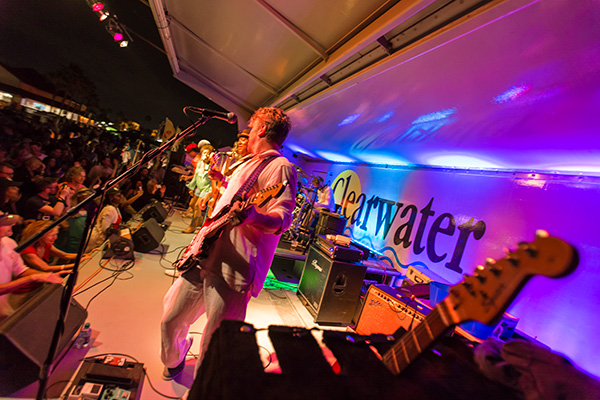 Located at 207 Coronado Drive, just around the corner from the iconic Clearwater Beach Marina, RockHouse Live Clearwater is slated to open in February 2021.

The flagship location features new construction with extensive indoor and outdoor seating, an indoor/outdoor bar, air curtains, and more, and will feature nightly entertainment and live music, including local, regional and national artists.  The venture is funded from outside local investors, a model which Bair and Weaver expect to replicate in other markets.

RockHouse Live Clearwater is expected to be open in time for Super Bowl LV, which is being held in neighboring Tampa on February 7th, and will have numerous flat screen TVs so fans can enjoy the game if they are not lucky enough to have a ticket.

Notably, the location will be the first to feature new integrated technology from VNUE, Inc. (OTC: VNUE), including Soundstr (www.soundstr.com), VNUE's groundbreaking "music recognition" platform, which helps to make sure songwriters and publishers are paid for music played in public spaces like RockHouse, and will help to reduce music licensing costs.

RHL Clearwater will also utilize VNUE's set.fm (www.set.fm), an innovative mobile and web-based content production and distribution platform, to record shows and sell the content to fans immediately after performances.  This is the same platform that is utilized by VNUE and sister company DiscLive Network to record such artists as Rob Thomas, and next year's upcoming tour with Matchbox Twenty.

Bair serves as Chairman & CEO of VNUE, and is also president of DiscLive.

Bair originally conceived RockHouse Live in 2006, after selling majority interest of the company he founded, Immediatek, to Mark Cuban of "Shark Tank" fame and owner of the Dallas Mavericks. Bair is known as a "pioneer of instant live recording," and has worked with and produced content for major artists over the last 17 years (Slash, Peter Frampton, Alter Bridge, Seether) all around the world, and most recently international superstar Rob Thomas.

Partner Jock Weaver is armed with the hands-on experience of expanding the iconic Hard Rock Café, which grew under Weaver's leadership from a $750k business to a multi-unit $200 million enterprise.  Weaver, who took Hard Rock public on two different stock markets, also founded and served as president of TBA Entertainment, at the time one of the largest live entertainment companies in the country. Weaver teamed up with Bair after he fell in love with Bair's vision for RockHouse Live.

Bair and Weaver expect that the concept will grow rapidly now that the flagship location has been finalized, and in fact have already been in discussion with several potential spots.

Investors are welcome to contact Weaver and Bair for specific information at investors@rockhouselive.com.

All RockHouse Live International locations will feature technology from VNUE, Inc., including VNUE's Soundstr music recognition technology (www.soundstr.com), to improve music licensing and to get artists paid, and set.fm (www.set.fm), the innovative "instant live" platform that allows artists to be professionally recorded and content made available to fans immediately after shows.

Locations will also feature proprietary streaming and production technology, so that fans may experience concerts in other RockHouse locations and around the world.

Investors seeking to learn more can contact Weaver and Bair at investors@rockhouselive.com.