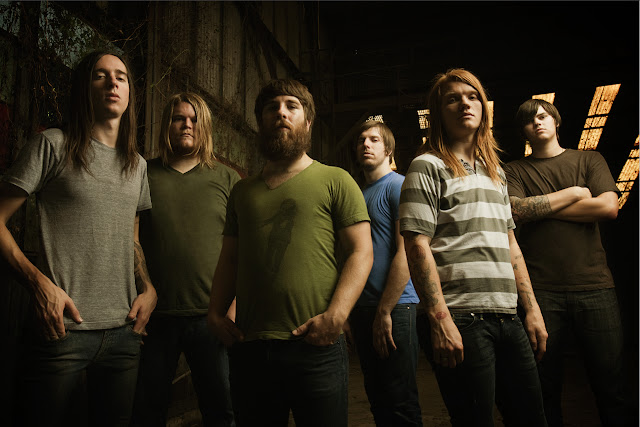 Underoath is an American Christian post-hardcore band from Tampa, Florida. Founded by Dallas Taylor and Luke Morton on November 30, 1997, in Ocala, Florida, subsequently its additional members were from Tampa, Florida. The band was actively recording music from 1999 until 2010, picking up two Grammy nominations along the way. Underoath disbanded in 2013. However, they decided to put the band back together and are starting the European leg of their tour later this month. By way of introduction, we will take a look at Underoath’s biography written after the release of their last album, Ø (Disambiguation).


For the six men in Underoath, whose members have evolved and thrived during a decade-long progression that has elevated them into one of heavy music’s biggest successes, change has been ubiquitous. 2010 has been no exception for the Tampa-based sextet, who underwent and overcame what many consider their most significant line-up alteration yet. Yet in doing so, Underoath experienced an artistic rebirth in the form of Ø (Disambiguation), its triumphant fifth album for Solid State/Tooth & Nail.

Transformed by the arrival of new drummer Daniel Davison, formerly of Norma Jean, Underoath, which also counts Tim McTague, Spencer Chamberlain, Grant Brandell, Chris Dudley and James Smith, has delivered an album that emphatically surpasses its predecessors in terms of craftsmanship and cohesion. If 2006’s Define The Great Line and 2008’s Lost In The Sound of Separation, both which debuted at #2 and #8 respectively on Billboard’s Top 200 Album Chart, were significant accomplishments, Ø (Disambiguation) is Underoath’s new creative high watermark.

“We all think it’s our best record by far,” says frontman Spencer Chamberlain of the band’s brilliant new disc. “I’d say to fans that you may have heard Underoath, but you’ve never heard Underoath like this. We can’t wait for people to hear it. There isn’t a single part on this record that we would change.”

Be it the commanding opener, “In Division,” which balances the cathartic approach that has made Underoath champions of hard music with an exhilarating melodic hook - or the expansive, inventive allure of “Catch Myself Catching Myself,” the Matt Goldman and Jeremy SH Griffith-produced Ø (Disambiguation) asserts that the departure of longtime drummer/singer Aaron Gillespie hasn’t hurt the band. In fact, the line-up shift has instead strengthened the band’s resolve and liberated Underoath.

Most notably, Spencer, who provided much of the singing and screaming vocals heard on Lost In The Sound of Separation – has embraced his role as the band’s lone singer, while bringing an ample supply of melody to Ø (Disambiguation). “We’ve never been afraid of singing, but the big poppy choruses are gone,” says McTague. “This record has a lot more of a mature feeling. It wasn’t that we hated melody, but we wanted it to be a proper fit.”

For Chamberlain, being the only singer in Underoath feels and sounds more natural. “It’s never been in my personal taste to have two people interchanging vocals, so I wrote my vocals on the album for just one,” Spencer explains. “It sounds less forced to me, plus it’s in the same voice. I made a conscious effort to make it interconnected. I enjoy singing, but before it felt like I couldn’t write a part and deliver it because of the inner workings of the band. Now there are no rules. I have the full creative freedom to deliver the song, whether its singing or screaming, the way I want to.”

But it wasn’t just Spencer, the rest of the band felt unfettered during the crafting of Ø (Disambiguation). “We let down our guard on everything with this record and just trusted one another,” Tim says. “We all wanted the same thing, no restraints. More than any other record we’ve made, this one came together more naturally. And ironically, we wound up with more melodic parts than ever before, but things weren’t so calculated.”

Without confines, Underoath arrived at atmospheric numbers like “Driftwood” and “Paper Lung,” two of the band’s most forward-thinking pieces yet, with little hesitation. The former, according to Tim, is inspired by Radiohead. “It’s our homage to the band. We embraced it and went were the song took us.” If that sounds like a radical shift, to hear it is to know it makes perfect sense with the pacing of Ø (Disambiguation).

Meanwhile, Spencer cites the aforementioned “Paper Lung” as his personal favorite on the record. “For me, it has a classic Deftones feel. It’s still dark and heavy but there’s a melody driving it. Big choruses, guitars, quirky keyboard touches. I love it.” But that’s not to say that the sonic fists that fans have come to know are being edged out, as evidenced by the fast punk-inspired charge of “Vacant Mouth,” the irate, unforgiving “Reversal,” the maniacal feel of “Illuminator” and the vicious, mind-bending “Who Will Guard The Guardians.”

As for Davison’s entry, Chamberlain and McTague both herald the drummer as a key element in Underoath’s ability to move forward. “The first person we considered was Daniel,” says Tim, who first befriended the drummer ten years ago when his band shared Southeastern stages with Norma Jean. “And he came down to play with us and things just clicked quickly and easily. There was no hesitation, he immediately fit in. After three weeks of writing with Daniel, we committed to do the new record on time and as planned. That spawned us into working every night, from 5 o’clock until 1 or 2AM the next morning. Playing for six to eight hours.”

“Writing with someone new, was invigorating,” says Spencer of Daniel, who has since become a permanent member of Underoath. “Drums play a huge part in Underoath, and I think Daniel just killed it. He destroyed everything in his path when it came to writing and playing. It’s been such a smooth and positive transition. It feels natural now.”

Working again with Goldman, who co-produced Lost In The Sound of Separation, and teaming with Griffith – who helmed Norma Jean’s most recent album, Underoath assessed what it had done in the past and ultimately sought to convey a similarly organic feel on the record.

“When we felt the record taking shape, we sat with it for a while. We looked at the songs and our past releases and compared the production,” says McTague. “We weren’t looking to go down the same road. Our last couple of records were super-produced and edited. Matt and Jeremy are both vibe oriented and helped us get where we needed to go.”

“There’s a lot of stuff on this record that some might consider it loose, but for us it’s got little imperfections, like we all do as human beings,” McTague adds. “And I think it’s probably closer to the live Underoath experience. The nuances that give it a little bit of life and character are present and we really embraced that. A lot of the drum stuff for instance happened in one or two takes.” McTague continues, “This record feels more natural because it’s a lot more sequential whereas our last record was more piece by piece. It’s a lot closer to our live experience rather than a flawless, computerized project.”

In that sense, Ø (Disambiguation) lives up to its meaning. It’s an album that speaks for itself as it provides clarity about a band that has experienced its share of misinterpretation.

“We want this record to set the record straight and it will,” Spencer concludes. “It’s presented exactly the way we want it. And when we play it live it will show that Underoath is, as it always was, the sum of its parts. I couldn’t be more proud of this record and happier with where we are as a band.”