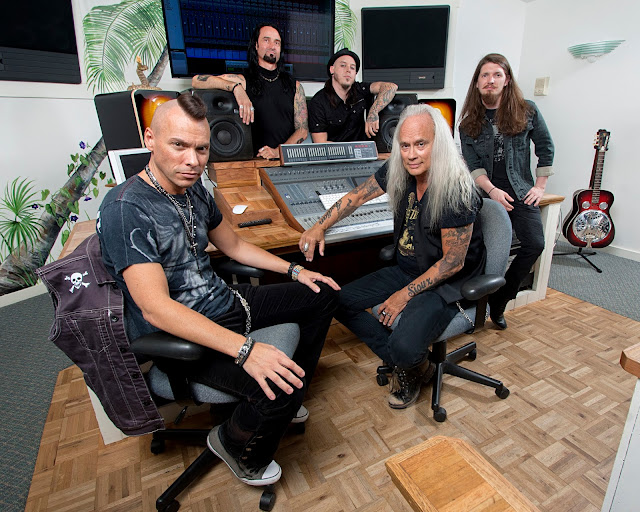 Blackfoot, the Southern American rock band who were originally formed in 1970’s by current lead guitarist of Lynyrd Skynyrd, Rickey Medlock, will be opening for Lynyrd Skynyrd May 4 at Coral Sky Amphitheater in West Palm Beach, FL and May 5 at MidFlorida Credit Union Amphitheatre in Tampa, FL.

Blackfoot will be playing songs from their 2016 Loud & Proud Records album Southern Native.  Medlock wrote, performed on and produced the album.  The title track, “Southern Native” premiered with Ultimate Classic Rock, who said of the song, “…it’s clear that Blackfoot retain the hard-edged Southern rock sound that defined earlier favorites…”

Blackfoot has always been defined by their hard rock edge as evident on their most successful singles “Train, Train” and “Highway Song.”   In 2012, under Medlock’s sturdy guidance, he recruited a completely new ensemble. The Florida-based band is carrying the torch for the next generation with their hard-driving sound.  Pure Grain Audio praised the band for their “…raw energy and enthusiasm…this assured-sounding foursome undoubtedly possess the talent required to take southern rock deeper into the 21st century.”

Blackfoot has toured extensively over the past few years re-igniting their fan base while introducing their new music and its members to fans of other Southern rock artists.  The band is in the studio working on their follow-up to Southern Native.  Rickey Medlock is producing and currently writing songs for the new album.


I recently spoke with Tim Rossi, lead guitarist/vocalist with Blackfoot. The conversation was both pleasant and enlightening. I want to share some of what we discussed. If you are a fan of Blackfoot, or want to learn more about them, here is a little of the interview:


How does it feel to be a part of Blackfoot with its rich history?

It’s an honor and a blessing. To be a part of something that’s been around so long. In rock and popular music, Blackfoot has been placed into the Southern Rock category, and has historically enjoyed success all around the world. To be a part of that, to be able to carry on that legacy is something that is very meaningful to me. Although I have a very good time while playing for Blackfoot, I take it very seriously. There is a very high bar that has been set. It’s good to continue to play and have a responsibility to old fans, as well as playing for new fans. I’m a very blessed guy.

Was it difficult to form this new version of Blackfoot?

Anything very good does not come easy. There have been some difficulties. The main thing is with collaborative art forms you must get the right chemistry. As the band evolved, we have been able to bring people in and see if there is chemistry. The fans have been very supportive of new music and open-minded about the band. It was tough trying to find people who had the fortitude to play in a rock band – with the travel, recording, rehearsing and other rigors. Fortunately, we have had a great lineup of guys.

In this case, we are very close. It translates to the personal side of things. We are so active together – on the road, in the studio. We are seeing each other every single day. I realize it may be a problem with some bands, but we get along very well and enjoy being together. We are very supportive and respectful of each other.

To look at Blackfoot and say that they are a Southern Rock Band is debatable. I think we can be categorized as a hard Rock band. Of course, geographically because of the bands origins of being from Jacksonville, the same place as Lynyrd Skynyrd, and other bands from Jacksonville many might put Blackfoot in that same category. I think that’s a little marginalizing. Blackfoot might be bigger than Southern Rock, or at least we have expanded outside of the borders of Southern Rock. It’s more of a geographical thing. Musically, Blackfoot is a rock band, just as Lynyrd Skynyrd is a rock band. We just happen to come from a southern state. The Southern Rock category has expanded outside of that label. Blackfoot has evolved and pushed those boundaries of Southern Rock.

Rickey Medlock has been a mentor to the new version of Blackfoot, would you like to be a mentor to younger musicians?

That is something I think about and Rickey constantly reminds me. As Rickey and I work together, and I pick up things from him he says in twenty years you will be passing on the torch to someone else and helping with their music. It’s great to be in that position and if you are fortunate to live long enough, you can pass on knowledge to someone else. I think the idea is very cool. It’s a romantic idea. It’s exciting to be a part of the process of working with Rickey Medlock today, and it will be exciting to pass on this knowledge to the next musicians to come.